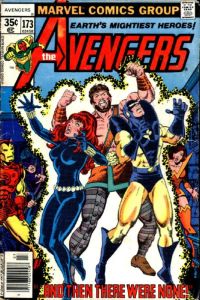 The issue starts with Iron Man explaining the severity of the The Avengers current situation to an assembled team that The Wasp brought together. It’s one panel that quickly sums up the main problem the team is currently facing. While I wish there would have been more than one panel to have a recap, it’s better than nothing. I simply think of readers that may have started the story with this issue. You have a very generalized idea of what is going on so you’re not lost in the story.

From there we get Hercules and Black Widow arriving in New York on a plane. Black Widow wants to get off the plane and to the mansion as soon as possible to deal with the situation they were called in for but Hercules is more concerned with impressing the ladies. There’s a way to show a hero when he’s faced with a situation that could put the world at peril. Have him more concerned about scoring with a handful of ladies. While the comics of this era were horrible when it comes to how women were treated for the most part, men were in their own way held to their own stereotypical standards. Now compared to how women were treated this is not THAT big of a deal mind you but treating characters as stereotypes severely limits what you can do with them.

Now Hercules is told by Black Widow that they have to get to the helipad on the other side of the terminal. He thinks it’s a perfectly good idea to rip a hole in the side of the airplane and hop through it towards their destination. The late 70’s may have been quite lax at airports before 9/11, I get that. But I don’t see how someone ripping a hole in the side of an airplane, no matter who they were, would be accepted by the authorities. Now maybe you could argue that if Hercules owned the plane it wouldn’t matter because the money was coming from his pocket. But later they say that they had to rely on Tony Stark to pay off the airline in order to leave. This was just pointless when these two heroes were needed at the Avengers Mansion in order to save the world. It is even another example why Gyrich the government official was very much in the right to deny The Avengers government support for their actions. Hell, after Hercules and Black Widow appear on the helipad and are refused service on the helicopter, Hercules decides it’s a ok to throw the helicopter across the tarmac destroying it. Again, while it may go a long way to showcase the physical strength of Hercules, it shows that in the smarts department he is quite lacking to say the least. His actions should have put him in prison, not delayed him twenty minutes.

Soon Hercules and Black Widow arrive at Avengers Mansion where Iron Man fills them in on what is going on. He tries in vain to contact folks on Tony Stark’s secret communication channels but has people that have helped him before like Nick Fury cut off communications. The Nick Fury panel confused me because that character has always been portrayed as someone who would always fight for the common good no matter what got in his way. I just didn’t buy his response that SHIELD would not assist The Avengers if the world were truly in danger. Maybe his assistance wouldn’t be overt but he’d find a way to lend a hand.

Anyway, we next head back to see what Korvac is up to after many, many issues of him being gone…in the story line that is about him. So, we see that he is very much aware of what is going on with The Avengers and the Guardians of the Galaxy. We’re told that he is doing what he can to make sure that anyone and everyone who could put a stop to his plans is being attended to. Then we see a bizarre scene where the woman who is his wife (it’s not explained if she is really his wife or taking on that mantle after meeting up with him at the fashion show) cries, shimmers with cosmic energy, and then goes back to normal. We see so little of her character up to this point that you have no basis to understand what is going on with her and why this scene is important. Things may end up coming together at the end of the story where as the reader you’ll realize the importance of her role in the story but with no character history to go on, as the reader you’re left confused which is not good. Not that you need a thirty two volume history of her life to understand her importance or anything but you can’t just treat her as a background ornament one minute and suddenly important the next. The readers have to have a reason to care.

We get a bit of an idea as to Korvac’s intentions. He wants to go after a being called Eternity. Eternity is the highest of high, most omnipotent being in the universe and if Korvac could destroy him, or her, he would have ultimate power. Before we can get further details Korvac senses the power coming from his wife. He investigates with what looks like every intention of snuffing out that power like a candle but senses her love and hugs her. Corny. Just corny, soap opera nonsense that has no place. The writer was trying to go for something deep here with this scene but again, with no real clue as to who anyone is apart from Korvac we have no reason to care about them. They’re bad. The wife may have some powers. We have no reason to care about their importance to the story because they’ve hardly been around.

Next we see the emergency meeting at the mansion has finally ended and the heroes all break up to do their own investigating, some alone and some in pairs. Iron Man in the previous issue made a big point of everyone pairing off but apparently didn’t think it was important for that to continue. Even a throw away line like him acknowledging that the pairing off last issue was pointless would have satisfied me but that didn’t happen. Anyway, we next see The Scarlet Witch crying about her brother and her husband both having disappeared. Hawkeye attempts to cheer her up but understandably fails. Then we see a character on a boat who is carving a Scarlet Witch figurine. It’s promised that he would cause problems for her in the future. I actually liked this tease. I have no clue where it is going. It was only two panels long but it does a lot to interest me in future issues.

Next up we see Thor enter the mansion kitchen where Jarvis is making Wonder Man lunch. Thor has no clue as to who Wonder Man is even though Wonder Man points out that they had fought in battles before. Thor tells him he is wrong. We’re again left to question whether the man we are seeing is Thor or not. Nice enough tease and all but it is apparently not important enough for these people to act upon. You would think that with the work they do they would take a moment to ask a few questions or do a little investigating. At least at this time in the comics life model decoys were very much a reality. Why would they not investigate whether Thor was real or not when he could potentially be a life model decoy sent by an enemy? Yet another reason why I agree with the government that The Avengers, at least presented in these pages, should not have anything to do with saving the world because they positively, absolutely suck at their jobs.

We cut to Iron Man talking to Black Panther. Black Panther suggests that they contact Vance Astro on the Guardians of the Galaxy ship for his assistance in location where the missing Avengers are. Vance has been alone on his ship all this time and could have helped them from the moment of the first disappearance but NOW they decide it’s a good idea to contact him. How convenient. I would have even accepted this development if someone, anyone, responded with a ‘Duh, I should have thought of that’ type of response. We don’t get this. We’re supposed to just accept that someone with the technology to help them, that could have helped them many issues ago in locating the first disappearances, was not thought of by anyone in order to help. Maybe it’s just me but I would think that if your job is to protect the world you’d take advantage of every tool at your disposal. But what do I know?

Suddenly Black Panther and Yellow Jacket disappear. They contact Vance who quickly locates where the missing Avengers are which again lets you as the reader question the competency of The Avengers for not contacting him sooner. Vance teleports them to this mysterious person’s ship. It turns out to be The Collector, who crows at the fact that he doesn’t have to capture the rest of them because they are now all there.

Yet another uneven story in The Korvac Saga. I find it bizarre that we are seven issues into this story and Korvac’s involvement so far would probably fill a half a comic if that. There are some good ideas that are tossed out there but some of the silliness like Hercules throwing a helicopter just cause makes any enjoyment of the story invalidated. If the writer cannot take the time to have the story make sense, why should the reader invest their time in the story when scene after scene occurs showing just how imbecilic The Avengers are. Especially in this day and age, when you have to sit back and agree with the government that the team that is supposed to be the heroes in the story should not have the power to do what they do, you have to admit the writer has done a horrible job in creating the story. It’s a shame too that such beautiful artwork for the time is being wasted on such a horribly written story. This is classic era homage on the pages and beautiful to look at. If the writer had just allowed the work to go through a proper editing stage at least once the story would be so much better. I cannot recommend this issue at all.