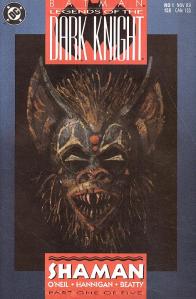 Batman. The name says it all. While I was introduced to Batman via the Super Friends cartoon…

to me my love for the Dark Knight occurred in 1989 with the only Tim Burton movie that I like, Batman. Despite some flaws (like the fact that Gotham City is supposed to be a version of New York but apparently all of twenty people live there) the movie had everything going for it. Acting, writing, even the direction were all melded together to make one hell of a film. From there, the quality of the films went downhill until Christopher Nolan took over the franchise.

But that didn’t mean Batman went away. One of the greatest cartoons of all time, Batman: The Animated Series debuted in the early 90’s on Fox and changed the way cartoons were made. Previously, cartoons were drawn on the cheap. The reason of course was money. People thought that children could give two shits about the quality of cartoons so they made cartoons with as many primary colors they could jam onto the screen and with scripts that helped showcase the newest toys the companies were actually showcasing.

Batman: The Animated Series was different. While it could be argued that the animation has not exactly stood the test of time, the writing and acting on the show is the epitome of excellence. My favorite character was The Joker and it was all of five years after the show debuted that I found out that Mark Fucking Hamill, Luke Skywalker himself, was The Joker. That was an insane revelation.

Then when I first moved out and became an adult I gravitated to the comics. I would occasionally pick up issues here and there growing up but growing up poor I didn’t get a chance to buy comics like I wanted to. It didn’t help that I didn’t have a comic book shop near my home that I could at least hang out in. One of the writers I enjoyed from childhood was Denny O’Neil, Batman writer from the late Silver and Bronze age of Batman stories.

Reading his work is kind of like a history lesson in the comic book industry. If you read his early stuff it is just as hokey and silly that other comics of the era are, where you have bad guys anticipating the actions of people they did not know could be there to stop their evil plans. From there, his work transitioned from the Adam West type of Batman to the Batman we know and love today. To me, the Batman cartoon most resembles the work of Denny O’Neil. Frank Miller definitely helped wipe the slate clean in the general public’s eyes of the goofy Batman that was in the 1960’s show but without Denny, Frank’s work would have been much more tough. Denny could show Batman being dark without making him so dark it borders on freakishness.

This story was the start of a group of comics called Legends of the Dark Knight. Made as a way to capitalize on the success of the Batman movie and works like The Dark Knight Returns and The Killing Joke, it goes about telling stories of Bruce Wayne before he is established as Batman.

This issue revolved around Bruce taking a bounty hunter with him to Alaska to find a criminal. They quickly find that criminal who shoots the bounty hunter dead. Bruce outwits him but the bounty hunter falls to his death. Bruce is left on a cold mountain without his gear alone.

He is eventually rescued by some local natives. He gets told an ancient story. He gets better and heads back to Gotham where he dons the cowl and becomes Batman. Than the story he was told comes back to haunt him when a woman he saved killed herself while referencing the story.

They did a good job of shoehorning in the story into the mythology of Batman without tying it directly into any other more well known work. It could easily be the Batman that Frank Miller created with his Dark Knight Returns or Year One story. It could also be an updated version of the Batman that Bob Kane and Bill Finger created. It’s ambiguous unlike Frank Miller’s work that we know is out of the existing Batman time line.

What I didn’t care for was how quick he was found on top of a snowy mountain in the middle of Nowhere, Alaska and brought back to health. The story sped along too quickly. The story that Bruce was told, the story that he should have kept his damn mouth shut on, was dealt with as if it were some delusion of his being unconscious and was dealt with and out of the way quite quickly. More should have been done to show how serious the story was and how Bruce would make a bad mistake if he didn’t head this man’s words.

In some ways this story is a lot like Gremlins. An arrogant white guy receives a gift from a minority, ignores the instructions he received upon getting the gift, and then wonders why everything is fucking up at the end. That is fine and all for a story but it was dealt with in such a rushed manner that you had no real idea of what was going on until the very end. From there I had to go back and read the beginning just to understand what the hell I read.

The artwork was typical late 80’s, early 90’s fare. These artists never met a background they could paint a single color onto. There’s no depth at all in the art. The character models are fine. I especially liked when Bruce tried on his uniform for the first time. I got the sense that this was the same Batman we saw flying across the cover of Detective Comics #27. But man, if only the backgrounds and other locations drawn in the story had a more realistic flair to them. Reading up on how comics are created, I’ve found that during this time comic artists had to use the four color palate in order to create their work. Now yeah, they could mix and match those colors to make different shades and colors but in the end it helps to have characters like Superman that have the one single, bold, iconic color and look about them that offering some shading or off color would not have helped. But sacrificing the look of the locations where the story took place takes me out of it as a modern reader. This may have been acceptable in 1989. This would not be published if presented for printing today.

This is not a bad start for a comic. Yeah it’s flawed but much like JJ Abrams first Star Trek movie, the good far outweighs the bad in the story. So if you do come across the story I suggest you buy it and enjoy a good read. As far as the story goes it is pretty solid. While I can certainly nit pick about certain elements of the story, the fact that it fits so seamlessly well into whatever version of Batman you want it to says a lot about what this comic did right. The only drawback of the story is the art in this case. I feel bad commenting on it because that would be like comparing He-Man from the 80’s to a cartoon being made today. Even the worst drivel you would find on Cartoon Network is much better than what He-Man was simply due to the fact that cartoons are made differently today. He-Man was a cookie cutter cartoon made on the cheap to help sell toys. Cartoons today have a lot more freedom to express themselves all the while being made cheaper that what it could be. But this art just doesn’t stand the test of time well. When any artist, whether it be illustrator, author, inker, whatever, starts creating work that will fit the here and now, their work will surely be judged harshly the more time goes on. Go back into Marvel’s history and you’ll see that they made huge mistakes in regards to capitalizing on current events at that time. Dazzler anyone? When they do that, it prevents future readers to enjoy what is going on because they just won’t get it. While it could be argued that art could be more representative of the times and be a window into the past, please remember that I am not referring to hair styles or the music people listen to in the story. We’re talking about how the damn thing is drawn. It’s just not good and brings what could have been a more enjoyable experience down.