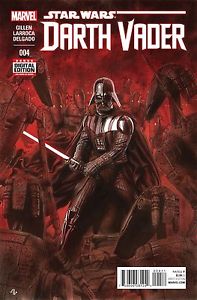 I love Star Wars. While the first real exposure I had with the films were once I grew up and the Special Editions of the movies came out I certainly remember how cool the commercials for the movies were growing up. I was at my cousin’s once in the very early 80’s and we played with Star Wars action figures that were stored in a Death Star carrying case. The commercials for The Empire Strikes Back were kind of scary. With old televisions, companies would take clips from movies and force them all into the square format that televisions were in. When they showed the commercials for The Empire Strikes Back on television and they showed the scene where Han, Leia, and Lando enter the banquet hall and Darth Vader stands up, that was quite menacing. Scary stuff, but scary like a good roller coaster is scary. I also remember going to Festival in Grand Rapids the year before I started kindergarten and there was Darth Vader himself shaking hands with kids right next to City Hall and the Calder.

The Special Editions were not as bad to me as they were to others. I get some of the anger because I certainly felt it when I discovered that the scene in Return of the Jedi had been altered for the Blu-Ray edition to have Vader scream NOOOO when he didn’t say anything before. There was no reason for Vader to say a damn thing. His actions said all that needed to be said. But again, my first real detailed exposure came from the Special Editions. I did like some of the little changes. Vader says a bad ass line after Luke throws himself down the shaft in Cloud City. “Alert my Star Destroyer to prepare for my arrival.” The way James Earl Jones said it along with how David Prowse strode across the screen just sends shivers up me spine.

Once I got married and the wife started having kids, I was determined to name a boy Luke. What turned out to be my daughter Ashley was going to be Luke but Luke for a girl would be a little awkward. Once my youngest popped out, I had my Luke.

When 2012 hit word got out that George Lucas decided to sell the farm to Disney. To say I was shocked was putting it lightly. While I knew Lucas was full of shit in regards to his stance that he wanted to only make 6 films and make them all about Anakin Skywalker, I did think that like anyone, he decided to change his mind and retire on his ranch where he could roll around in his money naked while local strippers recreated the Ewok celebration scene from Return of the Jedi naked. But having four billion dollars waved in front of his face made him realize that hey, letting others handle the grunt work and be yelled at for the results may not be such a bad idea after his work on the prequels went SO well. So now Kathleen Kennedy is running Lucasfilm and we have a Star Wars movie that people actually want to see again.

Being that Disney is the company that bought them, the company that originally had the rights to Star Wars for comics but decided in 1986 that the comics were just not selling and let them go, got to start making Star Wars comics again. The comics in question are all set after Episode 4. The one I’m reviewing today details a day in the life of Darth Vader.

Seems ol’ Darth kinda pissed off the Emperor with letting a little thing like the Death Star be destroyed and having thousands upon thousands of the Empire’s best troops die for one little tiny over sight. Yeah, it could be argued that it’s not ALL Darth Vader’s fault, but if his Star Destroyer crew had not let the escape pods successfully leave the Tantive IV at the start of Episode 4, he wouldn’t be in his little pickle. The Emperor decides that maybe his trust in Darth is not really worth it and sends him away all the while preparing to train his replacement (or replacements?).

This issue just did not do it for me. It wasn’t horrible by any means but, I don’t know, I think the writer tried too hard to make the story feel like a Star Wars story and not focus on making a good story. Improbably, Darth Vader has teamed up with a woman who is a droid archaeologist. That’s fine and all but I highly doubt she would be looking for droids that are all of maybe twenty years old at the most. They end up back on Geonosis, the planet that was featured at the climax of Episode 2. Wonder how Darth Vader knew droids would be there? Why the hell did he have to take a woman along to a planet that played such a pivotal part of his life? Wouldn’t someone in his position, even on the probation the Emperor is putting him through, able to find out if the planet that initially helped the Empire with making droids for their clone war is still actively manufacturing them? They tried passing it off as if it was one big secret that this was happening but Darth Vader is looking for a fucking army to support him here. He’s not looking for a couple droids he can clean up that will do his space dishes for him. He wants an army to fucking kill people.

And the bit at the end where the young lady that is helping him says she knows that he is there to kill her but magically he doesn’t. Are we to believe that the man who slaughtered young children just cause is able to let a young lady who has some real heavy dirt on him stay alive? They couldn’t even go the extra mile and somehow make her appear to look like Padme or something. With that, at least I could have believed that he would not allow her to die. But here, she is just there and she gets to walk away because in 2015, it would be bad for a bad guy to murder someone just because she’s a woman. Yeah, Darth Vader has good in him which is why he ended up saving his son. But he’s also a ruthless bastard who would kill you for making his space coffee too cold.

The art is pretty good but unimaginative. There’s no real passion here. It’s like a paint by numbers Star Wars coloring book. The design of Darth Vader was fine but here is a character that works best on film. With no face to show expression, it’s the job of the actor in the suit and the actor voicing him to really get across the emotion of the character. Yeah, you can bring some of that in as the reader which I certainly did but let’s think of that rare person who may not have seen a Star Wars film and doesn’t really know about Darth Vader. So much depends on your knowledge of the character that you lose sight of the fact that this is told at a time where we are still supposed to not know too much about him. I did however, in regards to the art, like the scope of the piece. It did a wonderful job in making open spaces feel like open spaces.

This is not a horrible read but it’s not a good one either. I would recommend it but keep in mind what you’re getting into. The only real enjoyment someone could get from this is if they have knowledge of Vader before they read page one. And then you’re going to wonder why in the hell Vader is acting is such bizarre ways. It’s certainly a much better attempt than the previous Star Wars comic I reviewed but man, what could have been a decent story is just not really enjoyable. It has its moments but for the most part is a head scratcher.