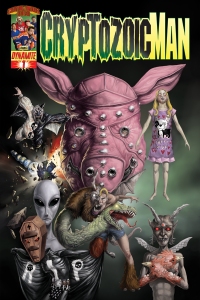 Like many I was first introduced to Kevin Smith with Clerks. I’ve been a fan of his ever since, even if his film work lately has been a bit uneven. What I love and respect from him is the fact that he supports his friends. Viewers of the AMC show Comic Book Men will see that long time friends of his, Bryan Johnson and Walter Flanagan, are two such friends. He’s included them in his movies as the characters Walt and Steve-Dave. He also has them run his comic book shop, Jay and Silent Bob’s Secret Stash.

During Season 3 of Comic Book Men, they decided that they wanted to put together their own comic which ended up being Cryptozoic Man. I’ve read the issue. I wish I hadn’t.

Issue one story wise is a mess. You get the basic premise that something happened to the main character’s daughter and due to intervention from aliens he changes into said Cryptozoic Man to hunt after creatures. As to the WHY he would do that, you don’t know. As to why he is fighting a pig man who shoots lights from it’s eyes, you don’t know. You’re just expected to go along with the ride.

Don’t give me the excuse that we’ll get further explanation in the next issues. The fact is the first issue of a comic has to wow me. It has to entice me to want to read further and this comic did not do that. When someone, you’re never quite sure who, is not busy monologuing, you’re getting a fight scene that makes no sense. Action scenes are great and all but you have to know who to root for if you’re going to be emotionally invested in what is going on. It’s like professional wrestling. If it were just two people in the ring with no names fighting and once the match was done they walked out and said nothing, you would have no interest in what is going on. What makes pro wrestling great (when it’s done right) is when you have someone to root for and someone to boo. When that someone to boo makes you so upset you want to pay to see them get their ass beat, they’re doing their job. The same with comics. If we don’t have a clear idea of who is good or bad, you’re just left a confused muddled mess.

Also, if you’re going to have your main character fight someone, when you suddenly have them decide to stop fighting and go someplace together, apparently another dimension or something in this case, please give us a reason why. The pig man insinuated that the people who made the main character Cryptozoic Man were actually the people involved in the taking of his daughter. Great. But we as the readers have to have a bit of a clue as to how the daughter disappeared first as well as getting to know the creatures who made the guy Cryptozoic Man before we can start to suspect they are bad. As it stands, I’m just confused and bored.

The artwork is the redeeming part of this comic. It’s intense to say the least but creepy enough to keep your interest. I just wish the story brought more to the table because in this instance some perfectly demented art is wasted on a story that makes no fucking sentence.

Sadly, I have to say it will be in your best interest to avoid this comic. It’s just too much of a clusterfuck for you as the reader to get an idea as to what the hell is going on. You have to grab the reader by issue 1. Not that you want to give everything away but you can tell a story that feels complete, makes sense, as well as impelling you to read the next issue. I give the story a 1.

The redeeming factor here is the art. The art from Walt Flanagan is well done and quite creepy. This comic is not for kids and the art really reflects that. The gore alone would make Freddy Kruger wince. Much like watching Blues Brothers 2000 so you can see the musical numbers, if you do read this comic you will enjoy the art. I give the art a 7.