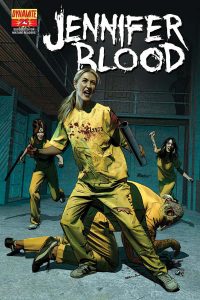 Thanks to a deal on Comixology I was able to pick up the first 36 issues of the Jennifer Blood series from Dynamite Comics. The series was created by the legendary Garth Ennis who is most famous for the Welcome Back, Frank story involving The Punisher.

For the most part the series has been a pretty fun read. It’s similar in vein to the movie Machete. The reality of the story is there to give you interest in the characters while they go off and do bizarre crazy things. But this issue has shown some of the weakness of the story so far.

Jennifer Blood had been established from the start as someone who was meticulous in her planning in her crusade against her evil uncles. Every possible scenario she had planned outcomes for so she could do her job and get out alive with no one suspecting her. Yet almost from the start she starts making mistakes that are so fucking stupid that even I know they are wrong. For example, if she were keeping her weapon stash in her home with her unsuspecting husband and children why the hell would she let it slip that the damn door to the weapon stash was open? Why would she not only be dumb enough to write in excruciating detail every crime she committed but also keep it out in the open where her family could come across it and read her crimes? In the comic she’d tried passing it off as a therapy method but come on, the details she wrote were in such detail that only a complete imbecile would believe her excuse.

She’d also been discovered by her son to be a murderer. At one point she even thought about killing her kids as well despite the fact that one of her goals in doing everything she did was for her family. It is hard to feel sympathy for someone who really doesn’t show any real concern or love for her family. She certainly likes the THOUGHT of a family but not the fact that she has real members of her family.

This issue would have to be considered a flashback issue. It tells the duel story of how she was caught and imprisoned for her crimes while also detailing everything she’d done to get to this point. It is hard to feel sympathy for someone who takes such glee in committing the crimes she did. Now you may argue that The Punisher is the same. That Frank Castle is just the same as Jennifer Blood, someone who had the right intentions but is doing something horrible to achieve his goal. But Frank Castle has been established as being someone who is more of a planner. He wants the bad guys to pay the ultimate price but he also wants to make sure that innocents are never involved. And I have yet to come across a Punisher story that involved Frank doing something like taking the intestines of one of his victims and using it to spell out his initials. That’s the action of someone who is deranged and is a sociopath. Hell, she even suggests that she may have stabbed her dog when she was a kid. Frank Castle snapped and wanted bad guys to pay. No matter how wrong he is, there is something noble about his mission. Jennifer Blood is just a deranged lunatic. (I hope she didn’t hear me.) While the story is still quite entertaining to read, I find it more and more annoying that we’re being somehow forced to try and care about the actions of someone that clearly doesn’t deserve to be cared about.

The art work from issue one is a big plus. It walks the fine line between realistic action showcasing the absurdity of the story we are witnessing. She’s deranged and crazy. The artist does a great job of illustrating the insanity that floods her mind. We see the brutality she dishes out as well as her insane version of what a perfect life would be. He also does a great job in showing the reality that shows its face in her life on occasion, such as her son finally calling her on her shit. The emotion on the kids face is real and well done.

This story is not a realistic story in any sense. If you’re expecting anything resembling reality, avoid this comic. This is the type of comic for people who enjoy Jason Statham movies (such as myself). If you sit back and think too hard about what is going on, you will realize how silly and stupid everything that is happening to these characters. But if you want a simple premise with lots and lots of gratuitous action, this is the story for you. It has real glaring weak points which is why I have to give the story a 4.

The art is well done. Not classic by any means like Frank Miller’s work on The Dark Knight Returns or anything like that but it does a great job in giving us a glimpse into the mind of a nutso. The little bits of reality that do shine through ground the story and give it more depth. I give the art an 8.