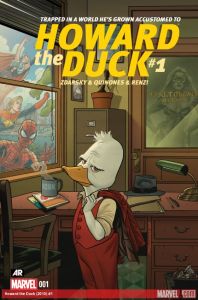 Howard the Duck. What a guy. Here is a character that while most folks know of him, their knowledge tends to come from that horrible movie from the 1980’s with Lea Thompson. I was glad to see James Gunn include Howard at the post credits scene for Guardians of the Galaxy because finally we could see a character get the respect it deserves.

What an enjoyable start. One thing I appreciated was that they didn’t make your enjoyment of the story dependent upon knowledge of anything related to Howard. It was nice they had the little nod at the introduction in the beginning to the movie but that was pretty much it. You’re diving into this world and the writer does a great job in getting you acclimated to the characters.

Tara Tam, Howard’s assistant in this issue was a pretty interesting character. Her debuted appeared to be more than an after thought than anything but she ended up being quite interesting and intriguing. She was built up as a bit of a mystery which could be set up for future issues since it was established that she pretty much appeared out of nowhere similar to Howard. Her work with Howard contributed to the fun of the story. If they end up doing nothing with her I will be disappointed.

The artwork fit the tone of the comic. It felt like a Saturday Morning cartoon with edge. It contributed to the light hearted mood of the piece.

I really didn’t care for Black Cat’s inclusion in the story. The fact alone that her character didn’t come across as she should really brought me out of the story. I also didn’t appreciate that her character, a cat burglar, was so easily discovered. If she is a master criminal, someone who could evade the authorities and Spider-Man at will could live just down the block from Tara. It was way to convenient to wrap up things and it was annoying and lazy as hell.

I also didn’t care for the sudden switch from Earth and a detective story to suddenly being in space. Granted, it leads us to a visit with the Guardians of the Galaxy which I will not complain about but they could have done more to not make the shift so jarring.

The artwork was a little juvenile for the subject material. I would have preferred the artwork to be a little more sophisticated since the character is a little rough around the edges. Having the appearance of a Saturday Morning cartoon when your main character is a cursing duck just gives off the wrong mood.

This was a good start for this series. While it certainly has its flaws it didn’t make the cardinal sin of assuming the reader knows absolutely everything about the character before you pick up the first issue. While I wish they could have dealt with his life on Earth before they suddenly brought him into space, it did its job in making me interested in issue 2. For that I give the story a 6. The artwork I’m a little conflicted on. While I appreciated the fact that the artwork helped contribute to the light hearted aspect of the story, it also hindered the mood when you have the conflicting emotions of light hearted along with the mature material. I give the artwork a 5.

Overall you will not be disappointed. The story is a great start to hopefully a long run for the series.