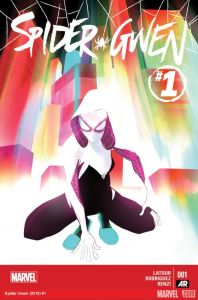 Another day, another comic review. I chose to read another comic with a female lead, which too often doesn’t happen in a male dominated world. I hadn’t heard too much about this particular comic and had wanted to give it a shot. This past week it debuted on the Marvel Unlimited app so here goes my review.

What a start. I really enjoyed this issue. Granted it wasn’t perfect but it hit all the right notes a debuting comic needs to make in order to keep people’s interest. I’d be vaguely familiar with the goings on in the Spider-Universe but not to the point that I knew 100% of what was going on in this comic. Initially I thought it had something to do with the Ultimate Spider-Man universe which saw Gwen Stacy reincarnated after she was murdered. That isn’t the case. This comic takes characters we all know and basically scrambles everything up and puts them in new circumstances. We see Foggy Nelson, Frank Castle and others in the story but not in the roles you associate them with. Now that doesn’t mean we won’t get to a point where they will assume the roles we associate with them in the main comic series but for now, they share the name and some character traits which is about it.

The ending was great because it was the perfect way to tease you enough to want you to invest more in this story and the comic series as a whole. This issue had a complete, pretty much self contained story with one twist at the end which hooks you in for issue two. Yes, it is part of a larger story that further issues will flesh out but overall you will enjoy the experience you have in this issue.

The artwork was pretty decent. It didn’t have the rushed look modern comics seem to be in love with however it was attempting to go for the Japanese Manga appearance. It didn’t stray too far into the absurd which was great. The characters were well drawn and the city really felt alive.

The writer could have done a better job in not relying on knowledge of other comics to have everything here make sense. They had a shout out to another comic series in the opening pages (With a rather Stan Lee-esqe pop up from the writer of the story acknowledging as such which was a great touch!) referring to the Spider-verse comic series which I didn’t care for. You have to find a way to entice the new comic reader to dive in without expecting them to having to study an encyclopedia of back story just to know what the hell is going on. While this issue didn’t commit a huge offense in this regard, it is enough to throw you off if this is your first introduction to the story line.

The setup for Gwen was rushed as well. It again probably has to do with the fact that her story is addressed in other comic series but I think they could have done a better job of setting up the character as if no one knew who the hell she was. Just because a person has the ability to purchase other comics to learn a character’s backstory doesn’t mean they will. You have to show them why the character is great first before you entice them to want to know more.

The setup of The Vulture was too weak in my opinion. It probably was dealt with in other comics but again I didn’t start off reading other comics just to dive into this one. I came into this comic not knowing much about it’s origins. The character had no real motivation as far as this comic established for him to be the bad guy other than the fact that he did something bad. You can have a character perform a bad act but without knowing the motivation as to why they are doing it, you could care less about what they do and when and how they get caught.

As far as the artwork goes, I have to say I am not a fan of Spider-Gwen’s outfit. While she doesn’t need a costume that mirror’s Peter Parker’s, this white mess they have her wear just looks obnoxious.

While this is not a perfect story, it hits all the right notes. It enticed me enough to make me excited for issue two. And while I mentioned not liking the fact that I had to rely on past knowledge of other comics to fully get what was going on, comics that I have not read yet, they didn’t go overboard with this. My enjoyment of the comic overall will definitely get me to read the other comics to get a better idea of what is going on overall. I give the story an 8. As far as the artwork goes, it’s not the sloppy work that seems to be in vogue now. While I didn’t care for Spider-Gwen’s costume, the artwork was pretty solid throughout and gave a sense of depth and character you don’t see in other comics. I give the artwork a 7.

You would do well by reading this comic. It’s a fun take on the Spider-verse which you will get a kick out of. You don’t have to rely on past knowledge of Spider-Man either in order to enjoy it. You’re entering new terrain here.